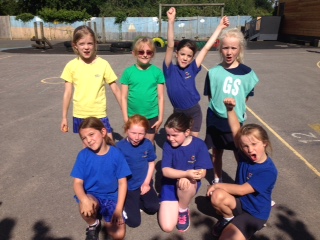 On Wednesday after school we played netball against St Lawrence. Luckily the weather was sunny and although a few of us were tired from sports day we played well as a team. We had year 2 and year 3 girls in the Dawnay team. We played with confidence and determination.

We played well as a team and communicated well on the court, we had lots of fun! After the game we celebrated with juice and cookies.